We are thrilled by all of the excitement that we see around Parse Server and Cloud Code development. We have seen many Cloud Code success stories, and at the same time challenges, for the Parse and SashiDo developers.

Today I would like to tell you about one significant addition to the SashiDo Platform, the Environment Variables, and the new Cloud Code Development Model.

In brief, using the Environment Variables is the best approach to design your code to work like an appliance.

Check out the 12factor config if you're interested in this field.

Many of you who have some experience with Parse would say: "We have the Parse.Config, why we need another way to configure our apps?"

Yes, this is almost correct, but not really. Parse.Config was built mainly for configuring the Front-end side of your applications, for things like feature flagging, changing the look and feel settings or managing some contact information.

All of this means that you need some secure way to store your credentials for Twilio, Stripe, Mailgun or any of the services you use in the Cloud Code.

In brief, the Environment Variables are the Parse.Config alternative for configuring the Back-end part of your application securely.

How to use the Environment Variables in the app's Cloud Code

And here is how the code will look like with Environment Variables.

As you can see in the first example, the code has the hardcoded credentials which make it not portable and insecure.

Setup your Environment Variables in the SashiDo's Dashboard 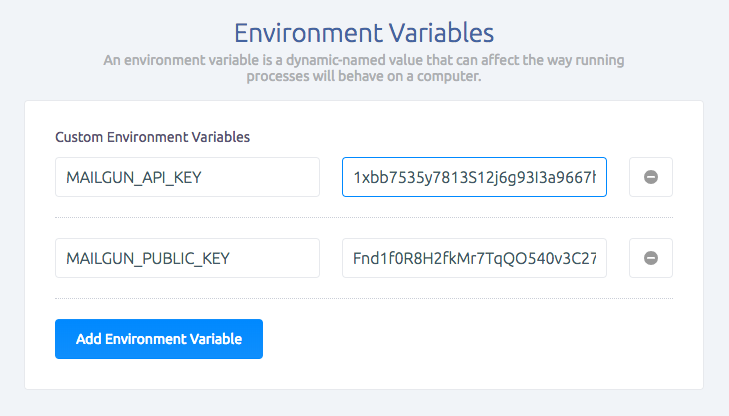 When you're done click on the Save & Deploy button, and that's it! :)

Environment Variables bring a new level of simplicity to work with the Parse Server Cloud Code. I hope you'll enjoy it.